NaNoWriMo has come to a close for me as I validated my work on the 26th at 58,901 words. I continue to be shocked and amazed that I made it to the end and then some. There was a lot of free writing and general writing notes. I did discover a couple “fatal” flaws in Reaper’s Moon which I need to figure out how to fix before I can continue on the rewrites. Overall, I am glad I have left it alone for a couple years or I would have been blind to its flaws. I finished out Elysian & Ether with 37 new poems. Nightmares & Nevermore finished out with 35 new poems. Passion & Prudence has picked up 3 so far. In total, I wrote 76 poems but the one for Reaper’s Moon is flawed as I realized a world building flaw after I wrote the piece.

This was an extremely difficult NaNoWriMo as I struggled with creativity, motivation, depression, ad social anxiety. For all my excitement about a write-in every day, it was too much for me mentally. I tried to overdo it only to trigger anxiety which aggravated the already looming depression.

In spite of this month’s difficulties, I am looking forward to next month and 2015. December will be an editing/planning month. I intend to edit a few more free chapbooks, Elysian & Ether, and Nightmares & Nevermore while working out the flaws in Reaper’s Moon. January will be the month to work on and, hopefully, finish Passion & Prudence. I intend to spend February with Reaper’s Moon. I want to get the flaws fixed and the entire book rewritten by the end of the month. I know I said I wanted to get the book done by the end of NaNoWriMo, but I did not realize that it had so many flaws in the world building and character constructs. There is a lot to fix before I can move forward. The idea is solid and the unflawed works are beautiful, I just need to figure how to put it back together without scraping the novel altogether. 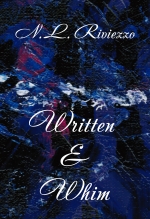