This week’s Poetry Book Wednesday feature is Elysian & Ether. It is the eleventh in the “A to Z” poetry books as well as my fifteenth published book. Elysian & Ether was released on April 14, 2015. Several of its poems can be read through https://words-scribbled.com/books/elysian-ether/. 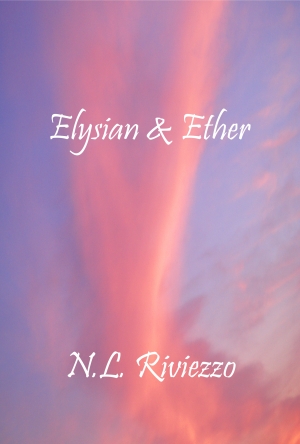 Today is the release day for Elysian & Ether. It is the 15th full length poetry book I have published since September 2011, and the 10th in the A to Z series. The theme of this book varies at the whim of the Muses yet Greek Mythology is referenced a great deal in description and symbolism. It is available as $9.99 paperback and a $2.99 Kindle book. I hope you will read and enjoy! Reviews, as always, are greatly appreciated.

NaNoWriMo has come to a close for me as I validated my work on the 26th at 58,901 words. I continue to be shocked and amazed that I made it to the end and then some. There was a lot of free writing and general writing notes. I did discover a couple “fatal” flaws in Reaper’s Moon which I need to figure out how to fix before I can continue on the rewrites. Overall, I am glad I have left it alone for a couple years or I would have been blind to its flaws. I finished out Elysian & Ether with 37 new poems. Nightmares & Nevermore finished out with 35 new poems. Passion & Prudence has picked up 3 so far. In total, I wrote 76 poems but the one for Reaper’s Moon is flawed as I realized a world building flaw after I wrote the piece.

This was an extremely difficult NaNoWriMo as I struggled with creativity, motivation, depression, ad social anxiety. For all my excitement about a write-in every day, it was too much for me mentally. I tried to overdo it only to trigger anxiety which aggravated the already looming depression.

In spite of this month’s difficulties, I am looking forward to next month and 2015. December will be an editing/planning month. I intend to edit a few more free chapbooks, Elysian & Ether, and Nightmares & Nevermore while working out the flaws in Reaper’s Moon. January will be the month to work on and, hopefully, finish Passion & Prudence. I intend to spend February with Reaper’s Moon. I want to get the flaws fixed and the entire book rewritten by the end of the month. I know I said I wanted to get the book done by the end of NaNoWriMo, but I did not realize that it had so many flaws in the world building and character constructs. There is a lot to fix before I can move forward. The idea is solid and the unflawed works are beautiful, I just need to figure how to put it back together without scraping the novel altogether.

On Day 12, I put out a free chapbook, in PDF format, called Spirit. It consists of 10 poems from Smoke & Spirit. (Clicking ‘Spirit’ will take you to the download page.) It is the first in the series of free chapbooks I plan to put out over the coming month or two. Please download, read, and enjoy. As always, reviews are greatly appreciated.

It is have been a profoundly odd week. A miracle that I was able to keep my lead in word count with free writing. I discovered I do not feel poetically inclined at my mom’s house at all. I mostly feel disoriented and exhausted.

Unfortunately, snow and below zero temperatures kept me trapped in the house for Days 10, 11, 12, and 13. The snow had let up on the 12th but temperatures of -13 degrees Fahrenheit- on the morning of Day 13 rendered my car useless. It also put walking to places completely out of the picture. They were a bit too far to walk to especially in such cold temperatures.

This cold snap also made it apparent that I need to find my winter clothing – including my winter coat – but I have no idea where all of it is packed. My odds of finding my clothing before moving again are slim to none I think. At the rate the house hunt is going, I should unpack some of my items yet there is nowhere to place the unpacked items.

I finally got free on Day 14 to run a few minor errands during the day, and to attend the evening write-in and NaNoWriMo halfway party.

I started to struggle after those two poems. I figured I would be all over these last eight poems like butter on bread since I had not much in the way of poetry for days. Perhaps the expectation was too much for my muse. I often struggle with the last few poems of a book to begin with. This time just seemed worse than usual.

The fact that there were 20 people crammed into a rather tiny space for the halfway party and write-in may have also played a role. Not a fan of groups even when they are all writers writing away. I briefly thought about leaving because the group was becoming too overwhelming but I was not in a place in the room where I could flee easily and quickly so I had to tough it out. I did not anticipate so many people, and had chosen a spot with a comfortable chair instead.

Eventually, I buried myself in my hoodie and ended up more productive across my notebook with the dance of a pen. I ended up with four more poems for my effort toward not freaking out by number of people and how they were to my personal space.

I completed Nightmares & Nevermore with two of the four poems.

Day 6 featured a write-in with another WriMo region just to the north of where I presently live. It went decently even though the coffee shop was horribly overpriced. I hope to attend the two other write-ins there this month as the group that comes out is nice. I may have picked future editing client. I got seven poems written. I was aiming for ten but it did not happen. I am trying to write ten poems a day in order to finish Elysian & Ether and Nightmares & Nevermore by the end of Day 10.

On Day 7, I managed 2,656 words and, from those words, fourteen poems which may be a new daily record. I was so optimistic about being able to get ten or more poems done each day.

Day 8, three poems done and those were a major struggle. This struggle is made worse by some bad choices I made on Day 7. I use to take over the counter pain killers in excess. I have spent months weaning myself from them. The last few times I had taken Ibuprofen, I had acid reflux/heartburn for hours afterward making sleep difficult. I thought it was food-related until last night. I ended up taking 200 mg of Ibuprofen before the Day 7 evening write-in because my back was bothering me (weather changes). At 1am, I woke up with the worse heartburn I have had in quite some time. My stomach remains all acidy nearly 24 hours later from when I took the pill. I have taken steps to help bring the acidy feeling down but my efforts seem to have been in vain. My back continues to be in a lot pain too. Sadly, I can no longer take aspirin or white willow bark either as they have been causing my legs to swell. Lack of sleep, no pain killers for increasing pain, and stomach acid do not put one in a writing frame of mind. Thanks to a lot of free writing, I managed to get close to the daily suggested word count in order to maintain my overage of about 2,000.

In spite of this lack of poems, I remain optimistic to finish the two poetry books this week even if it ends up being Day 11 or 12. I will attempt to make better use of my time too. When I am not at a write-in writing, I have been quite the slacker. Going to try and apply my non-writing time into formatting time for the books I need to finish converting into ebooks. I would also like to get started on my ‘Free Reads’ PDF chapbooks project.